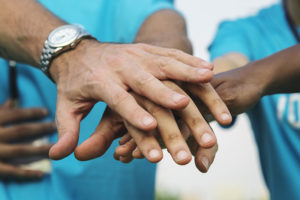 Reach began its incredible journey on January 18th 1990. It was a small, private practice, based in Birmingham, UK, with one practitioner. At that time it began with a series of personal development workshops, which were offered around the Midlands. These groups focused on the core elements of positive change, which included a better understanding of the mind, body, spirit and environment and the importance of self-care.

These workshops brought the first wave of enthusiastic clients, looking for ways to take back their power. Out of the success of these events Reach’s reputation grew and the work extended to a wide range of organisations including: Birmingham City Council, St. Basil’s, Aquarius, various arms of the NHS, a number of law and accountancy firms, the BBC (radio and TV), youth organisations, voluntary services, schools, universities and colleges. The contracts that were established with these organisations created the next wave of interest.  More than 20 years later, many of these relationships are still thriving.

Over the next five years Reach doubled in size.  There were now two practitioners!  There was no way of knowing then that what would follow over the next quarter of a century, was an expansion that would become both national and international, largely driven by recommendation and word of mouth. This is still the number one route via which people find their way to our doors.

Our websites, YouTube, our app Happy Hints, our gift shop, Facebook and other social media platforms have also played a powerful role in enabling our message to reach all four corners of the globe.

In addition, much of our work has been translated into a variety of languages, including: Portuguese, Spanish, German, Dutch, French, Czech and Urdu… and this list continues to grow.

Our articles and audiovisual and written resources are widely acclaimed.  Synergy: a cure for all ills has also done a valuable job of spreading our synergistic message – as it is the only book that encapsulates the essence of The Reach Approach.  As a result of its popularity, the sequel, Becoming Part of the Solution, will be published in the spring of 2020, to mark our 30th anniversary.

Reach is led by a senior management team which oversees all of its activities. In addition, there are 12 partners, each one playing a significant role in supporting our numerous projects and initiatives.  We now have over 75 practitioners who are part of our network and double that number have undertaken our postgraduate training courses.  We have graduates in the UK and overseas and during 2020 the number of people training with us looks set to double again – which will help us in our mission to create a new brand of therapists. This is because there are more and more individuals working in this field who realise that talking isn’t always enough – and so they are seeking out a new way of working, which addresses all aspects of the human condition.

The coaching arm of our practice (Coaching Plus) is flourishing as many of those with a coaching background are recognising the limitations of traditional coaching and want to work in more creative, innovative ways, using both the latest cutting edge knowledge alongside the wisdom offered by antiquity. What we’re especially pleased about is the number of younger practitioners between the ages of 30 and 45 who are coming through our training school.

We are proud of our record because we don’t make promises we can’t fulfill. Our message is simple; sustainable solutions are only possible when we take the knowledge of personal transformation and apply it consistently in our lives.  Only then do miracles take place.

So, as part of our celebration, over the course of 2020 there will be numerous landmarks, some of the most notable ones will be:

We believe the secret to our success is our ‘principle before profit’ philosophy. As a private practice we need to charge for our services, otherwise we would not still be here, but we believe in doing that in a way that’s fair and reasonable and most of all inclusive. This conscience driven approach has served us well, because the message is simple: treat others in the way you wish to be treated. This creates a virtuous circle, where everyone wins.

We hope you will join us this year in celebrating this great achievement.

In appreciation and love,

From all at Reach ❤️