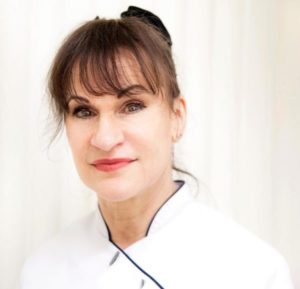 My name is Marie-Agnès Casalini and I am one of the first practitioners in the UK trained to apply the AtlasPROfilax® adjustment method.

I was educated and certified by the Atlas Academy®, Switzerland, SA CH 3960 Sierra and I became fully trained and qualified as an Atlas practitioner on 10th May 2007.  Since then I have treated hundreds of patients from all over England.

How did I become an Atlas Practitioner?

As long as I can remember, I have been looking for something which could create an amazing change to people’s lives and also something that would not only add to existing therapies, but something which would be very vital to people’s health. In 2006, a German friend of mine told me about friends having major results after having their Atlas corrected in Germany.

Unfortunately, there were no Atlas practitioners in the UK at that time so I decided to go to France to get my Atlas bone realigned into the correct position. After the correction, I was experiencing impressive changes: holding myself upright without any effort, so light and well-balanced, as if my body did not weigh anything anymore, I felt like I was flying!

“Before my Atlas was corrected, I suffered from knee pain when running. I found out that it was due to my pelvis not being aligned, which was creating more pressure on the knees.

I made many attempts with different practitioners to straighten my pelvis, without success. Whenever it was readjusted, it quickly went out again. Since my Atlas has been correctly positioned, my chiropractor has confirmed that my pelvis has remained straight and stable. I have had it checked a few years later, and it is definitively in the correct position, and my knee is no longer painful.”

I attended the first training given in the UK in May 2007 and successfully qualified as an “Atlas Prof” certified by the Atlas Academy® in Switzerland following the revolutionary method developed by R. C. Schümperli .

This is a treatment we at Reach are happy to endorse because the science behind it is sound, the experience of those who have reaped benefit from it is rapidly growing and it is simple and non-invasive.  Individuals only need one treatment for the Atlas to be realigned and the follow-up treatment is merely to manage any consequences that the treatment  may present.  It is very rare to find any treatment, especially involving structural change in the body, that can achieve that outcome after only 2 sessions!

New hope for many conditions – A new breakthrough treatment now available in the UK.

AtlasPROfilax®: An Astonishing 100% Natural Method For Pain Treatment, Prevention and Self-Healing…Most people suffer from a mis-aligned Atlas without realising that their postural imbalance and common aches and pains may have a quick and simple solution through a correction of their Atlas. The revolutionary method AtlasPROfilax® developed by R. C. Schumperli between 1993 and 1996, realigns the top vertebra in the neck, the Atlas or C1, by a very specific and unique correction of the soft-tissue that holds the Atlas in place.

If you suffer from recurring back pain, migraines and headaches, a stiff neck, joint pain in the hips and or knees, rotation of the hips, repetitive strain injury, jammed spinal nerves, trapped nerves, a difference in leg length, there is now new hope. With a simple safe and quick correction called the AtlasPROfilax®, people with many different pains and conditions have experienced amazing results.

The Method is called AtlasPROfilax® and it’s a strategic and non-chiropractic massage which is applied to the short musculature of the neck. In only one application, safely and permanently, the Atlas bone returns to its correct position. Old patterns clear and the entire system begins to function to its fullest potential.