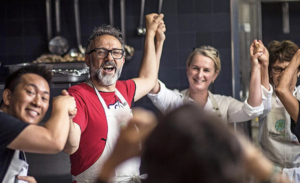 Massimo Bottura is no stranger to accolades. Last year, his three-Michelin-starred Osteria Francescana in Modena, Italy, was named the world’s best restaurant. But he’s more than simply a brilliant chef.

Three years ago, the 55-year-old restaurateur’s concern over food waste and homelessness inspired him to open a pop-up kitchen in an impoverished district of Milan, where he and fellow chefs used 13,000kg of scraps from markets to create 10,000 free, nutritious meals for the poor.  “We need to do much more when a billion people go hungry, while 33 per cent of the world’s food supply is wasted,” explains Bottura.

The success of that first Milan pop-up led him to found a non-profit organisation, Food For Soul, and to start permanent community kitchens, or refettorios, serving free meals to the poor and homeless. The first was in Milan, followed by Rio de Janeiro, London and Paris. The latest refettorio is in Naples.

“Cooking is hard work. But it is also an act of love,” says Bottura. “When you cook for the underprivileged, you put in more love.”