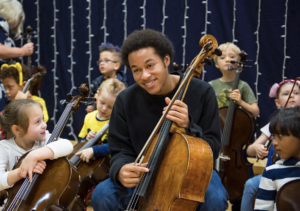 Now, thanks to the so-called “Sheku effect”, a new generation of young cellists is emerging, with Britain’s National Schools Symphony Orchestra reporting a 68 per cent increase in applications from young cellists.

Kanneh-Mason is using his celebrity to lobby for more music education in British schools. “It needs to be taught more, and better,” he says. He regularly visits schools to perform with young musicians. “I work with many children who wouldn’t have had access,” he says. “There’s so much talent among young people that needs to be combined with opportunity.”