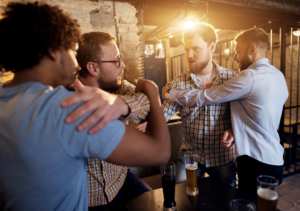 The largest-ever study of violent incidents captured on CCTV suggests that there are more Good Samaritans among us than we might suppose.  Researchers from universities in Denmark, Holland and the UK viewed video footage of more than 200 arguments and assaults in the cities of Amsterdam, Lancaster (UK) and Cape Town and found that in nine out of 10 cases someone stepped in to help victims.

The finding goes against the “bystander effect”, a principle of social psychology which holds that the larger the number of observers to an emergency, the less likely it is that the victim will receive help.

Lead author Dr Richard Philpot of Lancaster University and University of Copenhagen, says: “The fact that bystanders are much more active than we think is reassuring for the public.”