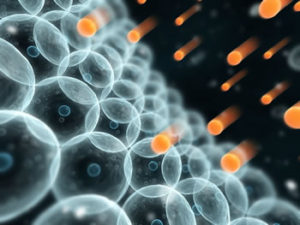 CoQ10 packs a powerful anti-oxidant punch: as a fat soluble enzyme it works in combination with vitamin E protecting lipids (fats) in the blood, and protecting membranes from oxidative damage heart, liver and kidney. CoQ10 is essential for the cells of the heart, providing energy for the heart muscle to beat effectively. Trials are indicating the benefits of CoQ10 supplementation on the health and functioning of the cardiac muscle and cardiovascular system and improved outcomes when used before cardiac surgery (1,2,3,4).

The increasing number of patients taking cholesterol-reducing drugs know as ‘statins’ may do well to consider supplementing with CoQ10, as it appears that these drugs have the ability to reduce the production of CoQ10 in the body. Research undertaken in 2005 concluded “statin-related side effects, including statin cardiomyopathy, are far more common than previously published, and are reversible with the combination of statin discontinuation and supplemental CoQ10.

We saw no adverse consequences from statin discontinuation” (5). Despite research in 2007 which reported physicians should be aware of this drug-nutrient interaction and be vigilant to the possibility that statin drugs may, in some cases, impair skeletal muscle and myocardial bioenergetics (6), little progress seems to have been made in doctor and patient awareness. A small cross-over study reported in 2009 demonstrated that CoQ10 supplementation improved endothelial dysfunction and statin-related type 2 diabetic patents (7).

CoQ10 is showing benefits to oral health in the treatment of gum disease, both as a topical application and when taken as a supplement (8,9).

Research indicates that there are potential benefits when using CoQ10 in the treatment of Parkinson’s disease (10). The high level of oxidative stress that can occur in the brain means that the protective anti oxidant capacity of CoQ10 is being considered for a number of conditions, including Parkinson’s and Alzheimer’s disease.

The application of CoQ10 and its implications in health and disease appear wide ranging and are increasingly being discussed in a variety of health arenas, (11).

Various studies have shown benefits when used in breast cancer treatment, a study into prostate cancer found that, ‘CoQ10’ induced apoptosis (programmed cell death) and as such is viable anti-tumour agent and may be useful in controlling the progression of prostate cancer’, (12).

A further study carried out between 1997 and 2004 found that low plasma levels of CoQ10 were an independent prognostic factor for melanoma progression, (13).

It also appears that statins may not be the only medication to lower CoQ10 levels. Research in 2005 showed the patients with corticosteroid dependent asthma have low plasma CoQ10 levels: however, a reduction in the dosage of corticosteroids was possible by the patients following antioxidant supplementation with vitamin C and E, and CoQ10, (14).

Also see: The Truth about Supplements and  Why Minerals are Vital to Life