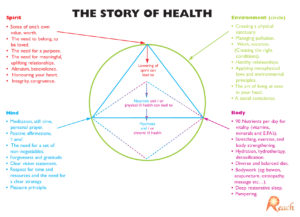 The Story of Health is the centrepiece of The Reach Approach and it states clearly that in order to achieve sustainable health and well-being we must equally meet the needs of mind, body, spirit and environment.  Each of these four aspects is critical to fulfilling our potential.  If one or more of these areas is neglected, dis-ease descends into the system and becomes the catalyst for disease in all its forms.

When you look more closely at The Story of Health you will see, in the area of spirit, meaning and purpose is considered to be one of the primary components to achieving mental, emotional, physical and psychological well-being.

It is now increasingly recognised in the developed world that those who lack meaning and purpose are more prone to depression, anxiety, neurosis and even psychosis, as well as a host of physical ailments.  Having a ‘reason to be’ in the world, following your joy and your bliss, is without doubt one of the most important factors in constructing your own fortress of peace, a sanctuary in which you can thrive. 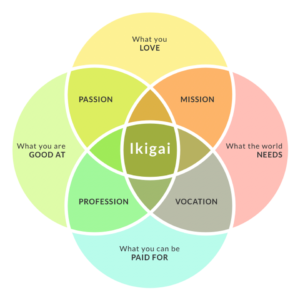 In Japan they have developed a beautiful system which is known as ikigai. The origin of the word ikigai goes back to the Heian period (794 to 1185).  Gai comes from the word kai, which means shell in Japanese.  Shells were considered to be highly valuable in that period.  Ikigai as a description means ‘value in living’.  In other words, living a life of meaning and purpose.

The diagram above illustrates the concept well as it shows the convergence of the four primary elements (see below) and the intersection between the other factors.

Although there is now much interest in this topic because where ikigai emerged from, the Japanese island of Okinawa, is reported to have the greatest number of centenarians per capita in the world.  It should be stated for accuracy that pursuing a life of meaning and purpose was around long before the Heian period.  In fact, this concept can be traced back to several hundred years  before Christ.

Below is a useful introduction to ikigai…

Also see: Change is Process Not an Event – Summary and Explainer Video on Change