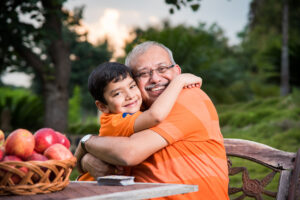 An affirmation is a comment, statement or any thought that is, or has been repeatedly registered in our minds, to such an extent it has become part of our belief system.  Once it becomes part of our belief system it shapes how we see ourselves and the world. Once the affirmation has been elevated to the stage that our belief and value system accept it, a whole spectrum of feelings belonging to that affirmation are born. For example: when we begin our life journey, we are as children very accepting of the information we are presented with. We do not at that time have the maturity, resources or discrimination to truly analyze or challenge much of what we are told.

So if the statement ‘you are very clumsy’ is used repeatedly to describe an accident you caused or a mistake you have made, this labelling of your actions is readily and easily absorbed, and because you are very much like a sponge in your formative years, you accept this description of yourself; especially if you hear it from those you hold in high regard, such as your parents, guardians, teachers etc.  So once the notion of being clumsy has been implanted into your mind several times, particularly by someone significant in your life, it begins to establish its roots; and with that comes the belief and inclination that you are clumsy.

It is important to realize that whether an affirmation is true or false, valid or invalid is irrelevant as far as the “affirmation – principle” is concerned, because if the thought, judgment or statement is affirmed often enough then the mind begins to accept it and in time it becomes part of one’s reality, influencing perception, attitude, moods and personality. Eventually the affirmation is afforded the status of a feeling, which will have the capacity to come and go as it pleases.  Therefore you will not need to be told or reminded you are clumsy by anyone, you will have absorbed it sufficiently to feel clumsy and be clumsy.

Positive affirmations are crucial in creating a healthy mental environment, in which thoughts that are positive, uplifting and empowering can be created. If a high proportion of the thoughts that live inside our heads are negative, then we are dragged down by that negative climate as such thoughts become feelings of low self worth, which perpetuate a narrow, critical view of oneself and the world, which in turn saps us of our ability to achieve our desired goals. The reason affirmations, whatever their complexion become beliefs is simply ‘repetition’, therefore any notion only has to be repeated enough to become an accepted member of our community of thoughts and feelings; whether it is true or false is largely irrelevant, it is the repetition of that affirmation that ultimately leaves its imprint on our minds.

One way forward in order that we can reverse this climate in which negative thoughts and feelings can multiply inside of us, is to apply the principle on which all affirmations are based, that is: repetitive thought … you are what you think you are! And if you think about yourself enough in a positive way then that is what you will become. If you take a look at your life you will see you already have some evidence of this truth, if your life is now flowing in a negative direction, consider how has this state been achieved? By taking a close look you will see it has been achieved largely by a diet of negative thinking. This negative flow can and will be changed if positive affirmations are given a consistent place in your life.

The process of reversing the train of negative thoughts is one that often meets with resistance from within because of the long-term establishment of many of our negative perceptions, thoughts and feelings. This almost inevitable resistance can be diminished and then transcended by using the phrase ‘I CAN’ in front of any positive affirmation. The use of this phrase does not automatically throw the subconscious into a defensive or unresponsive position, as it gently and subtly suggests to the subconscious that the affirmation being presented is possible. Therefore the potential for opposition from our subconscious is greatly lessened.

The subconscious compares new information with the data already accumulated and determines what course to take according to that assessment. We need to remember our sub-conscious simply accepts the information it has been given, particularly through its childhood and adolescent years, which go on to form the attitudes and values it uses to measure and compare all future information against. It is only later in our development that some degree of sieving the information we are presented with takes place.  But even then the original, core ideas we were offered as children are rarely effectively challenged, nor are there any real attempts made to dismantle those core ideas, because they have become accepted, integral aspects of our nature, and in most cases since they have never been challenged, greatly influence and shape our personality and whole outlook on life.

So we need not be afraid of any objections or opposition our subconscious throws up, it is simply performing its role and based on what it has been previously told, believes it is acting in our best interest. With persistence and patience, that natural and inevitable resistance will gradually evaporate and in its place will emerge a fertile mind able to produce a harvest of thoughts and feelings that are healthy, positive and empowering, leaving the ghosts of the past where they belong … in the past. So take the first step to creating a new life for yourself.

I can achieve anything I put my mind to.

I will be the best that I can be.

I am an amazing and special human being.

I can be the master of all life’s situations.

I will in time reach all my personal goals.

I am comfortable and at ease with myself.