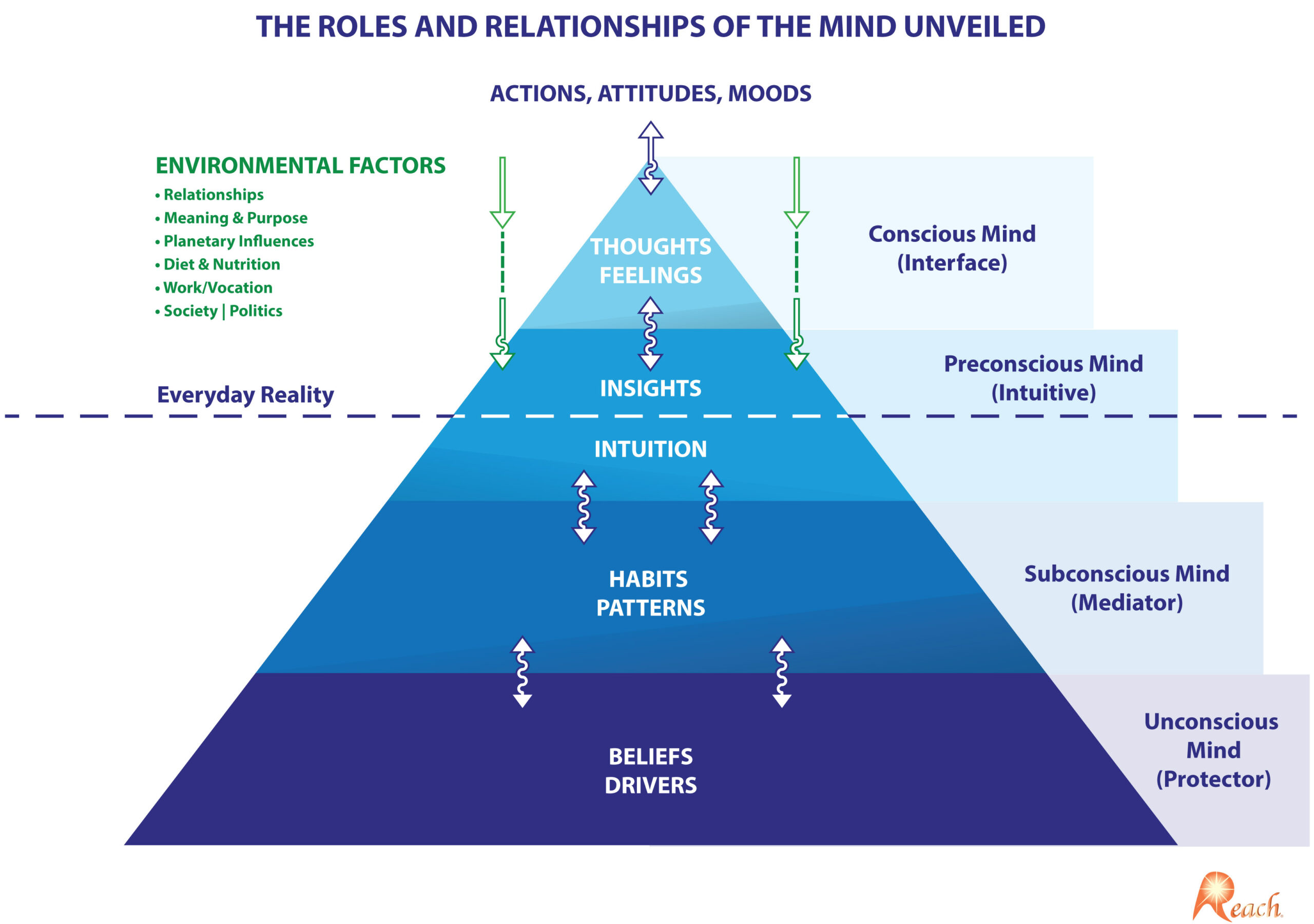 If we think of consciousness as an iceberg, the unconscious mind is the deepest point and in terms of influence and power, it contains somewhere between 40% and 50% of the overall capacity of the mind – although this figure can vary significantly according to one’s experiences and personal evolution.

The way the unconscious mind relates to the rest of the mind is quite simple. Unless new data can persuade it to change course, it simply will not deviate. The unconscious mind is not fickle or gullible, and it will not be sweet-talked into taking a path it’s not convinced is true and certain.

The most accurate description of the unconscious mind’s role and how it relates to the other three aspects is that of protector. This is its primary function. It is always using the evidence of the data it accrues to make what it ‘believes’ to be the best decisions and choices in the name of protection.

Activities that take the mind into trance offer a valuable inroad into the unconscious maze. Storytelling, metaphor, symbolism and imagery are also precious currency, which will help strike up a conversation at this level.

If we are to carve out a new road of fortune, one that will serve us better in every regard we need the mediator to make the necessary representations to the unconscious mind. Sincerity is the key to the success of this conversation.

The primary language of the subconscious mind is shaped by habits and patterns and so if we are to communicate effectively with this aspect, as with the unconscious mind we will find that repetition, metaphor, storytelling, symbolism and imagery are wonderful media for achieving this.

This brings us to the importance of the preconscious mind in the establishment of a new contract, which will bring the paradigm shift that is needed if we are indeed to sit on that seat of self-respect and self-realisation.

It is the preconscious that is able to see beyond logic and the senses. You will see from the diagram, it is partly submerged and partly emerged and so occupies a unique position – straddling the conscious and the unconscious worlds. Its primary interest is with the metaphysical because it realises this is where the magic happens – and being a slave exclusively to the conscious aspects of reality serves to deceive us.

The preconscious mind unfortunately has for so many become redundant. The spiritual and the metaphysical aspects of reality are increasingly viewed with disinterest and scepticism. Although there appears to be a mini revolution surrounding topics like mindfulness and meditation, the truth remains that our overall interest in the deeper philosophical issues has waned as modernity has increasingly consumed our hearts and minds.

The primary language of the preconscious mind is shaped by metaphysical concepts/ideology and deep-seated feelings – these are heartfelt, seemingly intangible murmurings emerging from the core. This is why introspective activities such as meditation, yoga nidra, conscious breathing, creative visualisation, mindfulness and prayer are all useful vehicles for communicating at this level.

The conscious mind’s primary role is best described as the interface. It’s the meeting point between the external environment and the internal environment. It’s where whatever transactions have taken place between the other three aspects percolate to the surface, shaping and influencing how we are in the world – which is visible through our moods, attitudes and behaviours.

The conscious mind is the least influential aspect at around 5% to 10% of influence/power. However, if the unconscious mind comes to dominate what’s below the surface, the preconscious mind can become redundant, thus allowing the conscious mind to double in size. This is not a good thing because it tends to mean that logic is dominating our behaviour and the emotional, subtler aspects that are of equal importance are largely inactive.

Of course the conscious mind is important in its own right and so its take on reality should also be respected, but when it is viewed in isolation, then a lot of reality is missed and misconstrued. Engaging in activities that slow us down, encouraging us to ponder and reflect enables what is happening at the interface to shape, educate and inspire us in the right ways.

The primary language shaping the conscious mind is thoughts, ideas and feelings. It is much more likely to be persuaded by conversation, intellectual concepts, relationships and their impact on one’s self image and self-worth. Social conditioning has a big part to play in how the conscious mind receives or repels information.

There is a constant ebb and flow – messages making their way down from the conscious mind and in the opposite direction powerful urges, impulses and impressions emerging from the unconscious and subconscious minds which make their way to the surface.

The conversation taking place between the internal and external environment is arguably the most important conversation on earth and if we are not aware of it and so are not consciously partaking in that transaction, we become victims of our circumstances.

It’s time to join in the conversation…