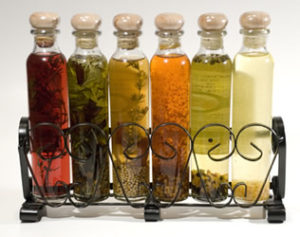 The antecedents to our negative mood states are multi-factorial, ranging from negative childhood experiences, poor nutrition and environmental pollution, unsatisfactory relationships and poor self- concept. It is no surprise, therefore, that the solution to our depressive and anxiety states, our mood swings, lethargy etc. is also multifaceted. The range of helping activities is far reaching, from the ‘talking therapies’, herbal remedies, dietary adjustments, hydrotherapy, positive thinking, exercise and other so-called alternative/complimentary approaches to health. One invaluable resource in nature’s treasure store that we can use is the application of the psychotherapeutic properties of essential oils.

It has long been recognised that aromatic oils are able to influence our emotional states and sense of well-being. Ancient civilisations such as the Egyptians and Greeks knew that some odours elevate mood, others have calming properties and help where anxiety states are a problem, whilst others encourage soporific states and improve mental functioning. Aromatherapy is the application of this ancient knowledge of healing and enhancing well-being through the use of fragrant natural ingredients i.e. highly concentrated oils derived from all parts of plants including the seeds, fruit, roots, leaves, flowers and the bark and resin of some trees. Aromatherapy treats physiological and psychological problems, the latter taking place when an essence is inhaled and the individual responds to its odour.

It has now been clearly demonstrated that when an odour is inhaled it impinges on an area in the brain called the olfactory epithelium which contains millions of nerve endings. It is here that the odour is transmuted into a nerve message which is amplified by the olfactory bulb, then passes along the olfactory tract and enters the limbic system (part of the brain concerned with memory and emotion, the ‘emotional brain’). The message is first analysed by the amygdala and hyppocampus which are memory centres in the brain and at this point that the odour may trigger a memory, recent or past.   (You may have experienced how powerfully you can respond to a scent, so much so that you are instantly transported down the corridors of the past). The message is then passed on to the hypothalamus which acts as a regulator and a relay station. From here the message can be relayed to various other parts of the brain and the therapeutic effect fully experienced.

Euphoric odours, such as grapefruit or jasmine, tend to stimulate the thalamus to secrete neurochemicals called enkephalins. Enkephalins induce feelings of well-being, a sense of being uplifted and euphoria and they also have pain killing properties. Sedative aromas such as marjoram, lavender, and chamomile stimulate the raphe nucleus which then secretes serotonin, a sedative neurochemical. Stimulating/invigorating odours such as rosemary and lemongrass affect the locus ceruleus with the resultant release of noradrenaline into the brain and this has the effect of arousal/waking us up. Aphrodisiac odours such as ylang-ylang and clary sage tend to stimulate the pituitary gland which may then secrete endorphins. Endorphins can induce both euphoria and sexual arousal and are also pain killers. Another group of oils known as regulators include geranium, rosewood and frankinsense help to regulate and balance systems and functions of the body and thus have a stabilising effect on the psyche.

The psychotherapeutic benefits of essential oils can be enjoyed as part of a number of physiological interventions such as massage or bathing, or quite simply can be savoured by adding a few drops to water in a burner (vapourisation) allowing the air to become scented in the oil of your choice. Why  not choose the most natural of nature’s offerings to enhance your life.

You can download (click the link below) the psychoaromatherapy chart and take a closer look at the primary characteristics of the oils, which areas of the brain are triggered and what particular issues those oils are able to assist you with.