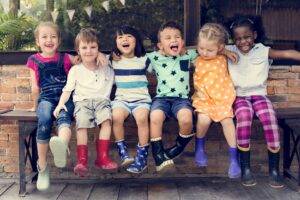 At first children are the essence of an unspoilt life.  Their life force is precious, beautiful and desperate to be actualised. Children are living paradoxes; they are both delicate and strong, driven yet easily influenced, aware and yet, in so many ways, totally unaware. The scientific debate of nature versus nurture presents us with a missed opportunity because it fails to realise that it is not a question of one or the other, it is in fact a marriage of the two. There is an intimate relationship between that which the child brings into the world (nature) and that which he/she  imbibes through his/her upbringing and environment (nurture).   The more successful this marriage, the more the child is able to realise its potential. Therefore, in order to empower the child, there are some essential facts that we need to embroider into our understanding and approach.

There are three essential aspects which are common to children the world over. All children are magical, non-logical and egocentric. Magical means that the child lives in a world heavily influenced by fantasy (imagination).  It is a world of countless realities providing a safe arena in which any issues and concerns can be explored or indeed avoided. It also is a wonderful back-drop for the world of play. Non-logical means the weaving together of information in ways that would often be absurd (hence the term ‘absurd logic’), yet to the child it makes perfect sense and so it forms the basis of his/her perception.

As adults we know 2 plus 2 equals 4 and yet in the non-logical world of a child, 2 plus 2 could quite easily equal 22! Egocentric means that the child sees the world almost exclusively through his/her eyes, personalising nearly all external events.  This means as the child imbibes the rich mixture of life, s/he is busy assigning his/her own perspective and drafting his/her own conclusions which often have little or no relationship to the facts. It is this egocentricity that makes it difficult for children to see beyond themselves which is also why they often take responsibility for things they are not responsible in any way for.

In addition to these three core characteristics, there are three primary needs to be considered. These are, to be mirrored, idolised and to belong. To be mirrored means to be in a world that gives clear and consistent feedback.  It means to be in a world that enables the child to find where s/he starts and where s/he finishes. Mirroring gives the child a sense of itself and enables it to understand the boundaries that will underpin and sustain growth. To be idolised means to be positively affirmed, attended to, to be showered with affection. This in turn fulfils the core drive, that is to be loved, treasured, to feel special and unique. To belong means to have understood one’s own value in the world. However, the child’s existence is denied full meaning without a sense of connectedness to the world.   We are social beings and isolation is our greatest antithesis. And so our need to belong, to be a part of, to be connected to, is paramount to emotional and psychological well-being.

It is when these core concepts are understood that we can best facilitate the child’s growth and development. The essentiality of these principles cannot be overstated and with a healthy grasp of the child’s core nature and core needs the amazing and boundless energy of the child can be fulfilled. The role of parenting is not simply to provide food, clothes and shelter. It is much more than this. It is to provide the atmosphere, the environment and the resources for emotional and psychological health. A child centred awareness, therefore, is about working with the magical, non-logical and egocentric nature of the child in a way that mirrors the child and provides boundaries, in a way that idolises the child and gives him/her a sense of self-respect and self-worth and finally in a way that creates an atmosphere of belonging and being an essential part of the world.